First as Tragedy, Then as Farce

The directions said head west on Excelsior,
take the third right onto Maple, and continue to 299.
No mention at all of cows staring out
from behind barbed wire. And such wind!
Like the mistaken zeal of Socrates’ executioners.
You thought but didn’t say, “We’re lost.”
Far-off, a hawk floated – unless it was a crow.
Kindness itself is a kind of love,
wearing only one shoe and a ridiculous party hat.

Party At the End of the World

The man in the moon
was drinking wine
from a plastic cup.
Everyone was.

A girl group sang
during halftime.
Taser me, I said,
or maybe just thought.

Which would you
choose – you know,
if you had to – fire
or ice? I’d choose

something that gives
a reason to ooh in awe,
the involuntary return
of late spring tulips.

The Fork in My Career Path

I was eligible for a full lifetime membership
in the disappearing middle class.
“What’s your mother’s name?”
the man at the computer asked.
The light from overhead seemed to flutter
as I formulated an answer.
Like a looted corpse’s,
my pockets had been turned inside out.
“Beautiful world,” I silently prayed,
“hold me while I’m naked.”

Howie Good, a journalism professor at SUNY New Paltz, is the author of the full-length poetry collections Lovesick (Press Americana, 2009), Heart With a Dirty Windshield (BeWrite Books, 2010), and Everything Reminds Me of Me (Desperanto, 2011), as well as numerous print and digital poetry chapbooks, including most recently Love in a Time of Paranoia from Diamond Point Press, Inspired Remnants from Red Ceilings Press and The Penalty for Trying from Ten Pages Press.

This Word Has No Word For It

This word is unpronounceable.
Translated roughly,
it means a bluster of breath.
Spell it as you wish.

This is the first word in words.
It means love
in any language.
And rhymes with nothing.

This is a dirty word.
Nobody knows what it means.
Class, linguistics
is not an exact science.

And this word will get you killed.
You spit it at your enemies.
Repeat after me:
This is the word for silence.

A man walks into a bar.
In his head are visions of amber.
A nail is hammered into his hair.
His hat is in splinters.

A man walks into a bar
and the planets change courses.
Slush and slurry head for the exits.
Gravity tugs on his nethers
while he washes his footsteps in beer.
And like the moon, he tips heavily.

A man walks into a bar.
Which isn’t a bar; it’s a temple
to the goddess of work and worry.
His coins are negatively charged.
His heels are sinking.

Then the waitress climbs from her sleeve.
In her eyes is the great outdoors.
In her heart is an alpine avalanche.
The man stares into his beer,
ignoring her curves and entrances,
his thoughts the size of Australia,
his mouth in drought.

In the time that it takes
to open his hand, nothing happens.
Over and over again, nothing happens.
Somewhere, wind in a meadow,
but the man is riddled with blank,
addled by light’s perspectives.
You can hear his life fading in and out.

He’s slowly coming to his senses.

Originally from Niagara Falls Ontario, Pushcart-nominee Bruce McRae is a musician who has spent much of his life in London and British Columbia. He has been published in hundreds of periodicals and anthologies. His first book, ‘The So-Called Sonnets’ is available from the Silenced Press website or via Amazon books. To hear his music and view more poems visit his website. 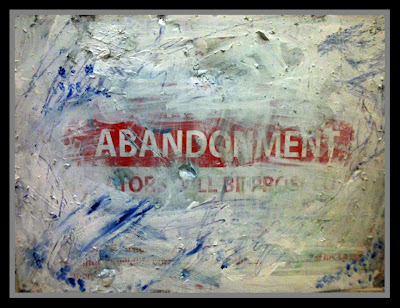 Luka Fisher is a Los Angeles based painter known forhis collaborations, mixed media projects, and work with musicians. Hiswork has been shown in Los Angeles, Detroit, Phoenix and is held in private collections in the United States and Russia.More of Luka's work can be viewed here. 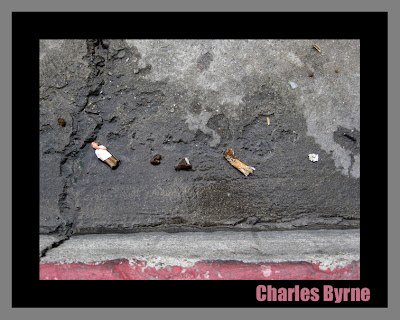 Charles Byrne is a writer and photographer living in San Francisco.

I.
The door ajar
seeping into darkness
through softly falling
leaves, fire-bright against
morning’s blue-grey mist
I liked this day until
too-cold rain

II.
My bare legs are cold
against your midnight eyes
and I know that you too
write about the rain


Fall; Past Those Same Bare Trees

Falling like leaves in autumn,
petals from dying flowers:
thoughts of you leave
trails behind me,

I walk this cold road every day—

maybe it will start to snow
and maybe
someone will watch it with me.

Savannah Grant is a student at Smith College studying English, Studio Art, and Poetry. Besides poetry, Savannah writes novels and short stories and hopes to published more work someday. She vastly prefers rain to sun and kittens to children. 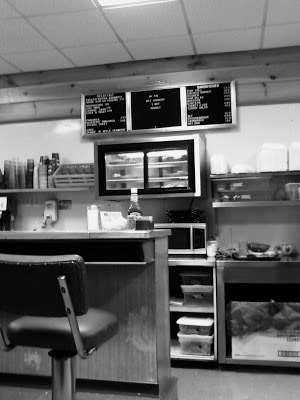 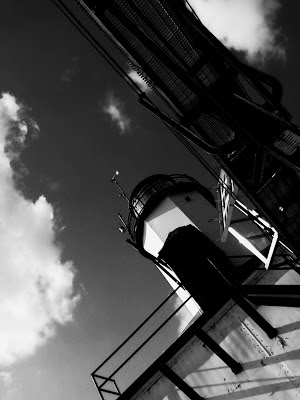 For many years, Lucinda L. Flanary was a retail clerk aspiring to be an artist...the she realized that she was an artist aspiring NOT to be a retail clerk. She is a poet, a published short fiction writer, photographer, painter and crafter who believes in re-appropriating found objects and finding morbid beauty in the dilapidated and the abandoned.

If the handle
is a U-turn curve,
you can use it
like a vaudeville hook
to pull yourself off

the stage of your life.
Morning, noon, and night;
four legs, two legs, three legs:
now you’re the answer
to a riddle though

you feel like a question.
And is a cane
not a question mark,
the black dot beneath it
the little rubber tip for security

in a slippery world?
Imagine the artisan
whose handmade personalized canes
tell the lie that
dependency is beautiful,

the kind of lie poems tell,
like this one you are reading.
Stop leaning on it now
and throw it away,
like a cane off a bridge.

Philip Dacey is the author of eleven full-length books of poems. Two books of his poems appeared in 1999, The Deathbed Playboy (East. Wash. U. Press) and The Paramour of the Moving Air (Quarterly Rev. of Lit.). Previous books of poetry include The Boy Under the Bed (Johns Hopkins, 1981), How I Escaped From the Labyrinth and Other Poems (Carnegie-Mellon, 1977), and Night Shift at the Crucifix Factory (Iowa , 1991). He has also published books of poems about the painter Thomas Eakins (2004) and the poet Gerard Manley Hopkins (1982).

My yarn is tight
Fine Egyptian cotton
Mercerized
Top stitched and fully-fashioned.
Your skin
It used to sit or swish
Inside of me
Against my limbs and lengths
My sleeves and being

that's what my PC says
as I
try to write

would rather
watch birds

sitting over
those tangled wires
I guess...

know him? I ask


he shrugs
takes his girl's hand
who's in a pink skirt

they both smile
at me
while nibbling at the ice-cream
and leave...

Kanchan Chatterjee is a 44 year old male executive working in the ministry of finance, government of India. He is from Jamshedpur, Jharkhand, India. Although he doesn't have any literary background, he loves poetry and scribbles as and when he feels the urge. He has contributed in many online and print journals namely Bare Hands Poetry, Shot Glass Journal, Decanto, Jellyfish whisperer, Mad Swirl, Eclectic eel etc. Recently one of his poems has been nominated for the annual Pushcart Prize of U.K.

Where I Am From • D. Dina Friedman

I am from buildings and concrete, from subways lined with spit,
from dark lights, thick letters announcing untaken exits.

I am from dirt, the dying sand under backyard sidewalks,
where carrot tops killed for surface space in the one available crack.

I am from weeds, and the miracle of bulbs
returning to their place of birth. I am from ink, spilling and spilt,

then bursting, like businessmen swarming out of subways.
I am from dinner parties and dirty plates,

from the shades pulled in the living room,
where my great grandmother sat in her black chair peeking out

between soiled Venetian blinds as I emerged
from a powder blue dress, its starched skirt twirling 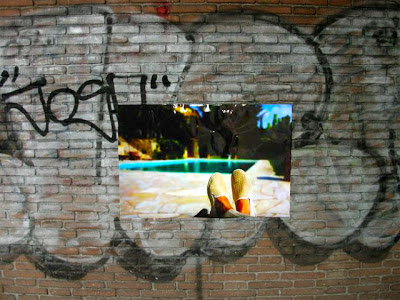 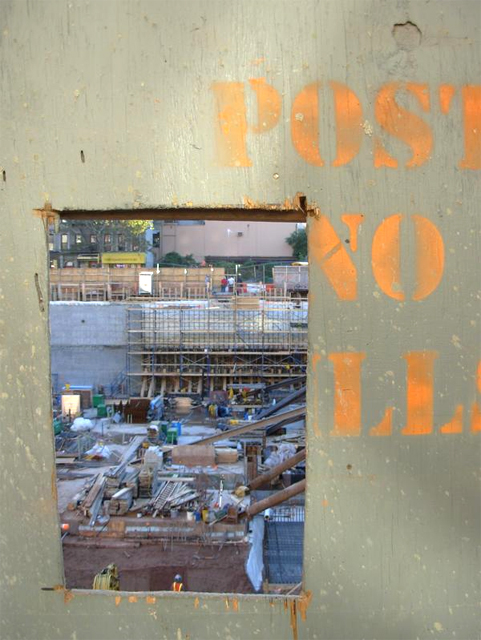 Brent's poetry has appeared in Poesy, Sweet: A Literary Confection, and Best Poem, as well as several DIY magazines. He has been writing for over a decade and has been behind the camera just as long.

You go out for a walk. The winter is
outside with its white brush painting
the rooftops. Squirrels here and there-
trembling in suspense.

And there is a scream from an indefinable
source. No dogs about, just leashes carelessly
discarded in backyards. Windows – two
eyes – closed, with lowered blinds.

And you are searching for the map in
your head, thinking: “Where am I?”
Listening to the repulsive sound of the winter
sucking at the bones of the trees.

Peycho Kanev is the Editor-In-Chief of Kanev Books. His poetry collection Bone Silence was released in September 2010 by Desperanto. A new collection of his poetry, titled Requiem for One Night, will be published by Desperanto in 2012.

Shredding on the Grave • David Breeden

The question
is not the silence;

that comes.
Arrives. After

The deftest of riffs.
No,

question
is getting there

with a note
of peace; with

a shred
of dignity;

with some minor
chord of

having played
this air

David Breeden's forthcoming book, Raging for the Exit, is a correspondence in poetry with philosopher and theologian Steven Schroeder. He has published four novels and twelve books of poetry, the newest titled They Played for Timelessness (With Chips of When).

A grackle perched
on a fence post
beneath an electric blue ocean of sky
where mountains and fat landmasses of cloud
do their continental drift thing.

Tiny sets of wings-
blue, yellow, orange
flutter up from the grass.

The wind and the trees are twisting
(like they did last summer
and at least a hundred summers before).

A sparrow is sitting on the driver’s
side mirror of a beat-to-shit pick-up truck
in the middle of a clump
of grass and weeds grown conspicuously tall
on a small square of the property
where all else is kept fairly low
to the ground.

Jason Ryberg is the author of seven books of poetry. His latest collection of poems is Down, Down and Away (co-authored with Josh Rizer and released by Spartan Press). He lives in Kansas City, Missouri.

mama cooked a duck so good
the meat fell off the bone
but it was small for a big family
daddy mixed whiskey with al green
granddaddy (my father's father)
dreamed of fishing as he sat in his chair
sis watched a cartoon
on the viewmaster projector
kevin fixed the chain on
his bicycle, and he was off
i looked at my present
and wondered could
things get any better than this...

Erren has published his work in Hiram Poetry Review,
Mudfish, Poetry Magazine (online), Ceremony,
Cactus Heart, Similar Peaks, Gloom Cupboard, Poetry Salzburg
and other publications. He is also the author of the chapbook, "
Disturbing The Peace," from Night Ballet Press.
He received his B.A. from Louisiana State University in Baton Rouge.